With the turning of seasons and the resurgence of nature, our garden fills up with the vibrant colours and fragrant scents of blossoming flowers and sun-ripened fruits. Spring and Summer symbolize the rebirth of nature and their arrival brings with it many new fruits and vegetables.

We grow basil, garlic, asparagus, chard, eggplants, peppers, chili peppers, parsley, apples (which are, in a way, the symbol of Badia di Pomaio) and strawberries. We also grow a wide variety of tomatoes, like ribbed tomatoes, ‘San Marzano’ tomatoes and beefsteak tomatoes. 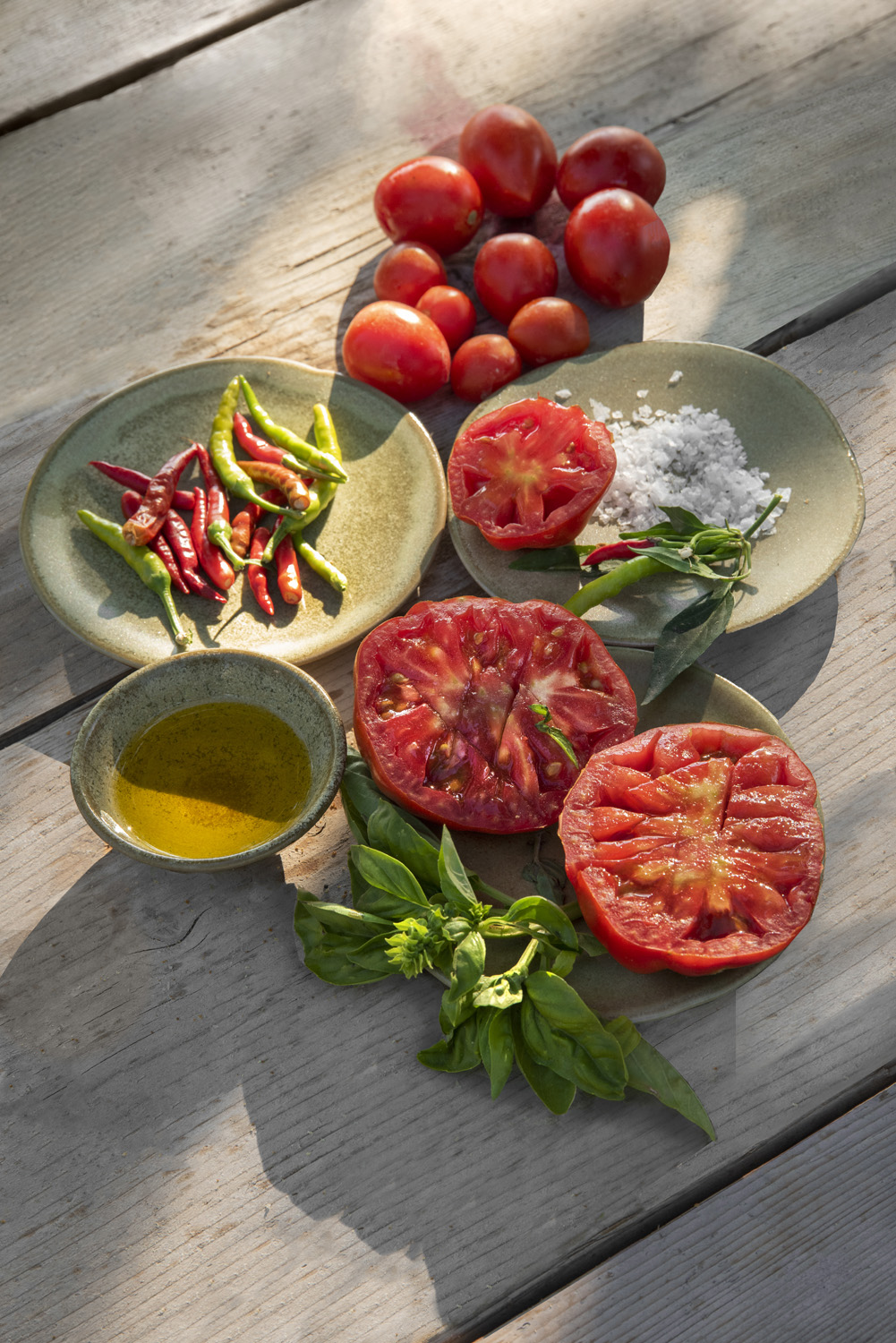 Of particular interest is the ‘aglione’, a variety of giant garlic typical of the Tuscan areas of Val di Chiana and Val d’Orcia. It was well known by the Etruscans and the Romans, who used it mostly for its therapeutic properties, but almost disappeared sometimes during the intervening centuries. Today, while still endangered, the ‘aglione’ has made a comeback in this corner of Tuscany, where it’s appreciated for its sweet and delicate flavour.

It’s used mostly to make a typical dish of this region: ‘pici all’aglione’.

The first mention of ‘pici’ was found in the decorations of an Etruscan tomb, making them one of the most ancient type of pasta in Italy. They are thick spaghetti made from a simple dough of flour, water and salt and cut into irregular forms. Thanks to its delicate and harmonious flavour, ‘aglione’ (mixed with tomato sauce and seasoned with a generous dose of chili pepper) is the perfect condiment for this pasta.

It might seem impossible, but Tuscany’s spring and summer cuisine is even richer and more varied than the autumnal one. The dish everyone, with no exception, prepares during the warmer months is the ‘Panzanella’.

Panzanella dates back to the XVI century, though its composition changed somewhat during the centuries (for example, tomatoes are a common ingredient nowadays, but were used exclusively as decorative plants back then). It represents one of the staples of Tuscan cuisine: in the kitchen, we don’t throw away anything. The main ingredient of ‘Panzanella’ is, in fact, stale bread and it’s not difficult to imagine why. Back when the mouths to feed were many and the money not enough, bread was an inexpensive commodity to buy and easy to bake. People would soak the leftover bread in water until it was soft and then mix it with all the vegetables they could find.

Today, ‘Panzanella’ is most commonly made using tomatoes, onions and cucumbers, with olive oil, salt and vinegar as condiments and basil as garnish.

You can find out more about which cookies we are using or switch them off in settings.

This website uses cookies so that we can provide you with the best user experience possible. Cookie information is stored in your browser and performs functions such as recognising you when you return to our website and helping our team to understand which sections of the website you find most interesting and useful.

Strictly Necessary Cookie should be enabled at all times so that we can save your preferences for cookie settings.

If you disable this cookie, we will not be able to save your preferences. This means that every time you visit this website you will need to enable or disable cookies again.

This website uses Google Analytics to collect anonymous information such as the number of visitors to the site, and the most popular pages.

Please enable Strictly Necessary Cookies first so that we can save your preferences!